from the original Daily Sip 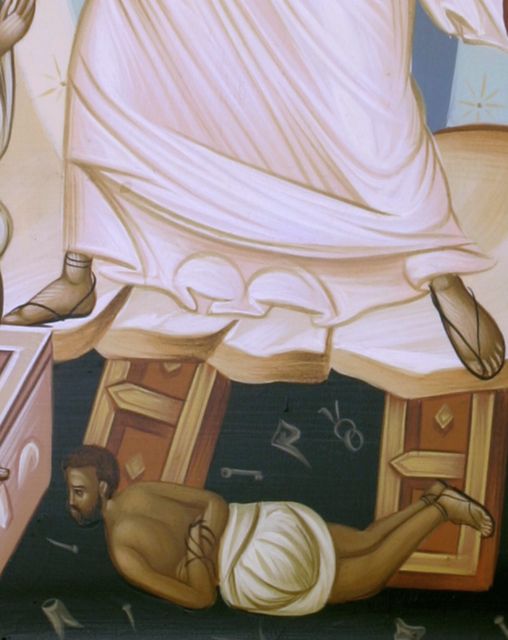 In the version of the Troparion which our churches sing are these words:

Christ is risen from the dead,
Trampling down death by death,
And upon those in the tombs
Bestowing life!

One aspect of this Easter icon is the reality that what God did in the first century at His death and resurrection is timeless- past, present and future in absolute concurrence.

The Mandorla (almond in Italian for its shape of intersecting circles) around Jesus, the lower right edge of which you see here in detail, goes from bright white to blues to indicate the telescopic symbolism of timelessness. The act of opening Hell’s gates and trampling death forever is happening this second, and last second, and the next second. It is not re-happening like a spiritual version of the movie Groundhog Day. It is happening in constant now and reaches back to the beginning of time and into the end of time which is why Adam, and Eve are the symbolic rescuees.

Jesus descends into Hell as seen from the hem of his vestment catching air. At the same time, Jesus stands firm on rock even having just broken through the stone barrier between life and death. In the abyss is the little man with a big diaper and his hands bound. This is symbolic of death and the largeness of his diaper juxtaposed against his small pin-head is part of the comic caricature of aspects of iconography. Floating in the abyss are the lids of the coffins and they plummet down (seeming smaller in the distance) into the darkness as well as all implements of death (keys to prisons, nails, nail-pulls, etc.)

The death Jesus tramples is not then. It is not God Friday of last week; not that one day over 1981 years ago. The death-trampling happens moment-by-moment making all things new every moment. What death has Jesus trampled? Certainly not physical death. We do still die. So the death he has trampled are the deaths which stop or hinder life – the ends which pretend to stop new growth and end new opportunity for life. The death of our death-dealing is the potential into which we do or do not plug ourselves in Easter. When Jesus grabs our wrist, do we let ourselves be pulled or do we slip away to enjoy or addictions?

There is, after mindfulness, co-creation in the spiritual life. Jesus does the work once and for all. But we must work with Jesus not to crawl back into our cells and, reaching through and around the bars, lock the doors with the keys we keep grabbing in our darknesses. Just because our sins are familiar does not mean they are life-giving. What a tragedy it would be to see Easter only in an altar covered in flowers on Sunday and not see Easter on Wednesday in an act of goodness from a mean person or an apology from an arrogant person or an act of forgiveness from a righteous person or an act of generosity from a greedy person. Or from you. Or from me.