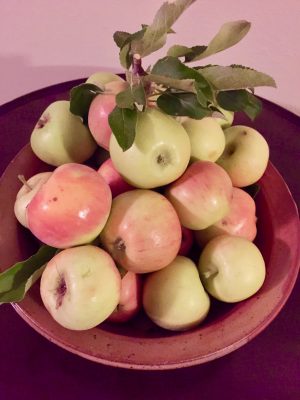 This is a bowl of apples from this farm.  I picked them today for a pie I plan to bake and for my lunch with cheddar cheese and a loaf of hot bread and some chutney. Apples are a complicated fruit in the Bible.

The official apple story in the Bible, a story which we have inherited in our tradition, is that Eve was a naughty woman, representing all women, and launched sin by picking and eating an apple from the tree of wisdom.

But our Jewish brothers and sisters have a different point of view on the myth of Eden.  The Orthodox Rabbis tell a different story.  In their story Eve is a teenager.  And like any teenager (or like you and me when we are acting out our inner-teenager way of being) Eve was curious and wanted to know what God knows.  In their version of the story, Eve meets the snake not only as one whispering the suggestion that she take the apple.  In their version of the story, the snake physically offers the apple, having picked it himself.  This little detail changes everything for me. The evil one not only points to it, but hands it over.  The snake takes the beauty of curiosity, the beauty of longing for wisdom, the beauty of hunger in its many levels; and turns it to its dark, shadow-side.

I often imagine the snake, without opposable thumbs, offering it from its wide jaws – and Eve taking a bite with hers.  Open mouth to open mouth around the luscious, red apple (or pear or pomegranate or whatever the mystics paint.)

In the Jewish version of the story, as told by Rachel Naomi Remen’s grandfather (Rachel being one of my favorite living saints and writers) Eve, by eating of the apple, takes God’s wisdom into her physical body-cells and heart-soul.  God entered into each cell of her body in that moment and we have inherited that presence of God in our cells. Eve then leaves the garden because she has wisdom and no longer needs the protection of the garden walls. She leaves being an adolescent and becomes an adult, able to hear God’s voice because God dwells inside her.

Let’s face it.  Over the centuries, pale, celebate, sexually repressed male theologians constructed the picture of Eve as a bleeding sinner who, by birth, passes sin and evil onto her baby.  The blood and feces through which a baby naturally comes in the birthing process were used, along with menstruation and the Eden story, to show an outward and visible sign of and inward and invisible sinfulness inherited from Eve and passed on by women.  So men constructed Christian sacraments out of this one, first story as a way to cleanse humans from the “original depravity” described and established by Augustine and his cronies in the fourth century.  Put simply, it was clergy job security.  I mean, if humans are born sinful and are infected by sin in the birth canal, then they need to be cleansed.  And if clergy wanted a way to raise money and ensure job security, why not tell everyone (people already terrified by life itself) that God is angry at their sin and the Holy Church can cleanse them in order that they not burn in hell?

But what if, as the Celts believed, the baby is not sinful and needs no baptism to be made presentable to God? What if women are not inferior beings? (Augustine called the women in bible studies led by Celtic theologians “amazonian” which, in his day, meant women without breasts or “un-female” women)  What if the doctrine of original sin is a construct – that Mary (and even her mother Anna) had to be virgins in order not to pass on sin to Jesus (as if God had no power to do so)?

Humans have looked to clergy and Bishops to make them feel ok with God by providing sacraments which restore and/or establish a relationship with an angry God and it has, for millennia, paid for Bishop’s palaces and diocesan churches, clergy expense accounts and lavish hotels for clergy conferences. It is, in a word, brilliant and lucrative.  But talk to a Bishop or clergy person today and they will tell you (if honest) that the younger generations are not as likely to drink the cool-aid.  They are not frightened of their God and they are not sure that a day in church is any better than a day with friends on a hike and a pic nic. Bishops are coming up with all sorts of schemes to raise money for their empire-building.  And it is no longer working.

If this Jewish version of the Eve story is true, then all we need to do is deeply and regularly listen for the God within and around us in our cells and in the cells of the apples we eat and the grass on which we walk bare-footed.  God is speaking, but not only in churches.  God is speaking in the amazonian rain forests, in the ice of the arctic, in a hot apple pie, in a hand held, in the fresh loaf of bread in a warm house of laughter and even in the brick apartments of the inner-city ghetto.